On the joyous Occasion of Royal Wedding

Faraway behind the curls of joyous clouds, behind the beautiful mountains capped with pristine snow, behind the standing trees of mother green, behind the oceans where the flying birds disappear, behind the curling roads which leads to many other curling roads, and within the little Himalayan kingdom whose treasured history is filled with reign of gracious monarchs, where peace have always prevailed to make its imminence embedded in not just religion but also a daily affairs of its loyal subjects, history shall began yet another  imperial chapter with the pageantry glorified in the chapter of history with not just historic but a heartfelt occasion with the holy marriage of our King. Once again, thousands of Bhutanese will rejoice upon the beaconing of not only historic but also a heart touching fairytale of royal wedding ending towards the new dawn in the annals of Bhutan’s ever harmonious history. The occasion as royal as such, marks another milestone in the reign our humble king, and to be actually blessed with beautiful and humble queen, can there be anything sacred than such occasion to us as a loyal and happy citizens of Bhutan.
As I sit down to scribble this felicitations, how much I wish that if I could paint this ever treasured possession of my heart to be able to pay my utmost respect and prayers for the harmonious union on the canvas that which shall never wrinkle and always be there in life as the dear achievement any loyal citizen is remembered with. Human history is not short of stories of love and thus the tranquil it has heralded upon, but never were an occasion where I could be much a part of than this Royal Wedding which insights not just extraordinary feelings but a historic great. Ergo even though I am faraway in the land miles away from the peaceful wedding hub, Drukyul, with much joy, I celebrate this heavenly feeling of excitement.
It seems to be only few days ago when His Majesty, much to the delight of Bhutan, announced the desire to marry Jitsuen Pema, then the unknown woman whom our king described as young, warm and kind in heart and character, the qualities together with the wisdom that will come with age and experience which will make her a great servant to the nation. And that through the union, he shall have a queen who supports, works and serve the people and country. Time in the merrymaking of such joyous tidings, nation once again came into a overwhelming mood to look forward to the much awaited moment that most of us has not even realized that it’s been almost five months. And as royal merit respect, I respectfully thank His Majesty for letting one forget the daily toiling of life and anticipate merrily for this occasion.
Truly, by the certain graceful deeds in the last few months of our queen, Ashi Jitsuen Pema, there is little doubt (which would of course be so much unholy even to think of one) left in us, loyal citizens, of whose joy our king, humbled as People’s King concerns. She embodies the perfect human being saddled with qualities which are best described as cheerful, beautiful, supportive and humble. In the times of such modernized era, when fashion intrudes into everyone’s heart and soul, Her Majesty the queen, still embodies the perfect character of cultured woman, an epitome of a soul nurtured with one’s rooted culture and nourished with wisdom of heavenly earth. It is with utmost pride that we can continue to live in Bhutan and serve the king with a new hope of harmony in the country where the king is supported with an ever intelligent queen who has not just the wisdom highly noted but also a care and love for king and the people. 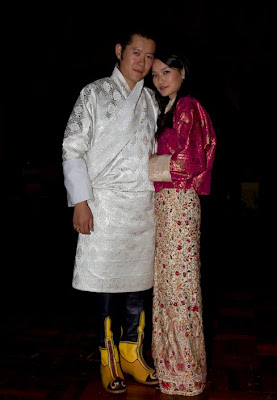 And well, to describe the king and his indulgent qualities, no amount of words would suffice to describe it. It can sometime be argued so much without doubt that it is something that should be felt and be rejoiced of than trying to describe it in words. Heavenly happiness and peace through the benevolent reign of certain king worshiped as next to god, it can only be felt. And to be blessed with a union between such two, there is nothing so extraordinary happening on earth than this one. It is a time for us to pray for everlasting happiness upon our country.
Nation shall sing the song of happiness, unity, loyalty and sovereignty. Monasteries shall lead the beads of prayers which thus shall be heard by the thousands residing in high and low, plain and narrow, and it shall be lavished with greater wishes and prayers. Offices will remain closed with the time graced to mark the occasion as nation embarks on new history, schools shall dance to the tunes of happiness and excitements around. For once and all, Bhutan shall rejoice in the glory of our King’s marriage solemnized in Heaven. It heralds new beginning, a journey that we begin with the happy royal wedding. Tomorrow when the history is read, let this occasion be one of the most exciting and the extraordinary events in the pages of our peaceful history.
As for me and my wishes, a heartfelt prayers that I am conveying, I shall ignite it with vigor enough to crawl upon the curling clouds, climb over the white snow mountains, run along the great Indian plains, row over the waves of oceans, pass across the standing trees of green earth, defy the torrent winds and thus be there together with you all’s prayers that it shall be hidden in the folds of the holy scarf His Majesty would wear. Thus it shall console me of the fact that I am unfortunately not around Bhutan to be a part of the time called upon to witness the greatest event in our glorious history.
Let the peace and Happiness prevail always in Bhutan.
May God bless the King and the Queen!
Email Post
Labels: Bhutan